Ivermectin for horses (AbIver™) and Ivermectin praziquantel (AbIver Plus™) are two anthelmintic drugs that are very helpful in combating equine parasites. But what makes these two dewormers different from each other? First-, AbIver™ consists of ivermectin while AbIver Plus™ a combination of ivermectin and praziquantel.

AbIver  contains ivermectin as the active ingredient. It belongs to a class of anthelmintic drugs known as macrocyclic lactones. Each sachet of AbIver™ contains 60mg of Ivermectin granules. This drug targets a variety of internal parasites but is reportedly most effective against all stages of bot larvae. Ivermectin is not recommended for tapeworms

Compared to most of the parasites that infect horses, botflies are relatively benign because they can't bite, but in large numbers, their larvae can cause problems.

. As a broad-spectrum equine dewormer, AbIver targets large and small strongyles, pinworms and bot fly larvae. AbIver is safe to use in horses of all ages, including foals 6-8 weeks old and pregnant mares. 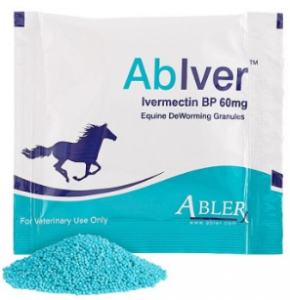 AbIver Plus can control parasites at their different stages. This includes small strongyles that have developed resistance to benzimidazole-based equine dewormers.  On top of that, AbIver Plus can also target one of the most significant equine parasites, the tapeworms. With just a single dose of this anthelmintic drug, horse owners can control a wide variety of important equine parasites. AbIver Plus™ is generally safe to use in adult horses and foals that are 6 weeks old. Recently, studies have also shown that this product is also safe to use on pregnant mares at any stage of the pregnancy.

In deworming your horse, it is important to choose which ingredient to use. Of course, there is also a need to know what species of parasites reside in your horse’s body through fecal exams. In giving equine dewormers, it is recommended to consult your veterinarian. Together, you can develop a strategy that effectively controls specific parasites found in your horse.