How to be the expert on different horse ulcer symptoms

What is the difference between gastric and hindgut ulcers?

Equine ulcers are often lumped together. Gastric ulcers are not the same as hindgut ulcers.The area referred to as hindgut refers to the segment of a horse's intestines that follows the small intestine. They are typically located in the right dorsal colon. Gastric ulcers occur in the stomach.Both diseases are common in horses. Understanding the different symptoms will help identify the correct course of action.

How can I tell if my horse has hindgut ulcers

The signs of hindgut ulcers can vary. But a common sign to watch out for is loose manure. That can entail diarrhea to normal-formed manure with just a liquid component expressed at the same time. The other tell tale signs include:

What should I do if I suspect my horse has hindgut ulcers?

Here are the general signs of an ulcery horse whether gastric or hindgut. 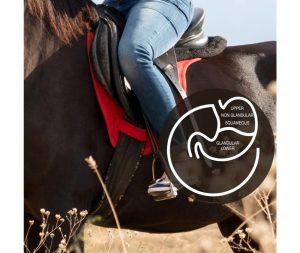 There are two main symptoms which are indicative of gastric ulcers in horses.
In addition to general ulcer symptoms,Chewing, cribbing (or crib biting). Altered food behavior.

Gastroscopy is used to diagnose gastric ulcers in horses. However gastroscopy is not effective in diagnosing hindgut ulcers. For a non invasive method of checking for ulcer symptoms at home follow this tutorial.

Dealing with Equine Inflammation: Bute or Banamine?
How To Help Your Horse With Winter Stress
Let’s Talk About Strongyles: Enemies to horses