My 9 year old paint was having some typical pain type symptoms, occasional gritting of teeth, swishing of tail, pinning ears back and just not being himself. He was seen by the Equine Chiropractor as well as vet. He had been scoped a year ago after having surgery for an impacted jejunum. While there were no ulcers found at that time he was placed on a week of UG as a preventative measure. Towards the end of fall various symptoms would come and go. It was suggested he might have ulcers and I could try to rule out his symptoms by a trial of UG.. After pricing this med, I was surprised at the high cost. A dressage instructor, vet and fellow rider suggested AbPrazole as an alternative. I ordered it and although the shipping time is very long, I was so happy with the price. My horse is doing better and seems happy again. I am reordering maintenance doses for him. I put a very small amount of grain in his feed bin, drizzle some molasses on it and then sprinkle the 3 packages of med on the grain. The little blue balls stick in the molasses and he thinks he is getting a lovely treat. Thank you for this very convenient packaged product. 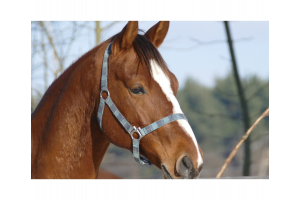