Eventing is Crazy, and Not for the Reasons You Think - Part Three

Article (part 3 of 4) by: Karen Czarick of Dancing Horse Farm who lead a team of four to the Chronicle of the Horse 2013 USEA Training Adult Riders Eastern US win

A couple months later Grant was still sound and actually got to make his Novice debut…kind of.

Our dressage test wasn’t stellar, but it was solid. He was in the top third in a big field of horses. He held his place with a clean stadium trip and I was looking forward to cross country, having schooled most of this very course a few weeks before.

We were almost half way around when he galloped up a large hill and stopped and propped at the top, just to get a better look at the montage of obstacles and people at the bottom of the hill. I was too far out of the tack and up his neck from going up the hill (and not paying attention) and popped off over his shoulder.

Totally fine, I was on my feet immediately and confirming with officials that it was not jump related and that I could hop back up to finish.

I was even fairly confident that with his huge stride and the conservative meters per minute required at Novice, we could finish without time penalties.

It was not to be.

As I walked up to a very nonplussed, rider-less Grant, he put his head down to graze and take full advantage of his free rein. And…of course, he stepped on that rein, breaking it along with the cheek piece.

Did I mention there is no refund? My husband did.

Oh, and did I mention the bridle was brand new? My husband did.

Ugh. I often say to folks that this sport is a process and you’d better learn to love the process as much, if not more, than the “end result” (whatever that is) or you’ll make yourself nuts.

I work, two jobs, and so does my husband, just so I can do this as much as I do.

I am the first to admit that I love to compete, and not only because I’m competitive. Sure, winning is great and I do think it’s important to be a competitor myself to better serve my competing students.

I love everything that goes along with competing in horse trials (well, except packing the trailer).

I love hand grazing in the cool dusk with friends, or just my horse, while walking cross country over and over in my mind, and telling whoever’s there (friends or just my horse) what fences worry me…and knowing that those friends will tell me I shouldn’t be worried and that we’ll do fine (whether or not they that’s what they really think).

I love stressing so much while I’m braiding that the fact that it’s 5:30 am and freezing doesn’t matter and the very act of braiding becomes a Zen thing.

I love the energy, the anticipation, the sickening feeling in the start box at the 30-second countdown and how it vanishes seconds after hearing “5, 4, 3, 2, 1, have a great ride!”

I love the fact that galloping through a water complex in perfect balance makes you forget the dressage test canter depart that wasn’t.

I love when you’re both so tired you have a rub on the last stadium fence but the rail stays in the cups anyway and you realize as you cross the finish that you’ve at least held your placing, if not moved up.

I love the lessons learned when things aren’t perfect and the celebration when they are…and the fact that fellow eventers are so supportive either way…even if they’re also your competition.

And, boy, I love the rides (all three…yes, even the dressage test) and the fact that I’m not doing this “on” my horse, but “with” him.

But, reality does kick in and you have to balance your goals with your check book, and it’s much easier to justify the expense (to yourself and anyone else who is vested in you) if you at least get to finish.

So, I went home from that event, pretty bummed, but a “good” bummed, because it was going so well up to the bridle incident, and not because I was questioning whether I had a horse that was suited to this sport.

At our next event, the planets finally aligned.

I did end up sick with some stomach thing most of the weekend, and both Friday’s and Saturday’s dinners consisted of 7-up and saltines in the trailer, but Grant picked up the slack all weekend and we stood in second again after dressage and rocked cross country to the extent that it solidified my conviction that he was doing exactly the sport he should be.

A piloting-error rail in stadium dropped us to third, in amazing company, but I was elated.

We’d finished, and rather well!

Those laurels were comfy, but resting on them doesn’t keep your horse or you fit and sharp or put money in the bank so back to work…both with Grant and at the paying jobs.

One of the reasons we’d done so well on the limited cross country runs we’d had was the fortunate absence of ditches on course, or at least “real” ditches.

Grant was ditchy and I knew it.

Even getting him over the one my husband built right in the pasture at home was a challenge. We’d never gotten over one the first try at a school, and oftentimes it would take half a dozen attempts or more.

The next event was the Area Championship (that one, third-place finish was enough to qualify us for it) at a venue I’d never been to, and I heard the two ditches that they alternated using on the Novice course could be tough if you had a horse that was the least bit ditchy.

Well, didn’t have to worry about one of those ditches, because they decided to use BOTH since it was a championship course.

The course would be the most challenging to date with regards to terrain and “lookiness” and I seriously wondered if we’d even make it to the first ditch without at least one stop.

Unfortunately, this event fell right in the middle of a transitory period in our dressage work. Grant was none too pleased that I was asking a bit more of him with regards to self-carriage and we were in one of those awkward stages that you just have to go through.

Warm up was bad; the test was worse.

We were right in the middle of the pack after dressage, which was actually much better than I’d expected.

But, the ditches haunted me.

He was a bit behind my leg for the first third of the course, but we didn’t have a stop. Then, we came to the first ditch. He planted himself in front of it and then just shut down. The very kind jump judge allowed me five attempts before she blew the whistle. Not only was this the big “E”…Elimination, but he was able to walk off course without going over the ditch.

Not a good lesson learned. I was crushed.

It was early enough that I could drive home in daylight, and I seriously considered it. But, there was a lovely stadium course waiting that I’d already paid for, a bbq dinner that had been included in my entry, and I was sleeping in the trailer so no extra hotel cost.

The smart thing to do was ask the Technical Delegate for permission to run stadium. I called my husband and he agreed I should give it a go. Permission was granted by the TD, and the next morning Grant loped around like a hunter, leaving everything in the cups on a course that saw stops or rails from almost half the competitors in our division.

That was bittersweet for me. I know it was a good school and confidence boost for us both, but such a shame that it had to come on the same weekend that the ditch got us. 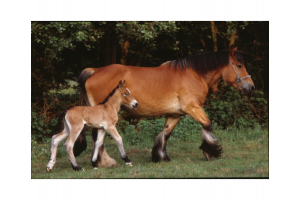